"They always get away" 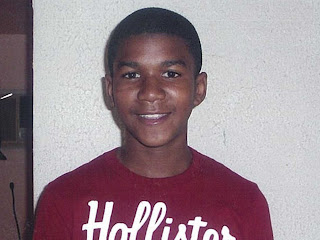 Author: Gary Younge. Quickly removed from website The Guardian (UK) after a few hours.
Title: Open season on black boys after a verdict like this

Let it be noted that on this day, Saturday 13 July 2013, it was still deemed legal in the US to chase and then shoot dead an unarmed young black man on his way home from the store because you didn't like the look of him.

The killing of 17-year-old Trayvon Martin last year was tragic. But in the age of Obama the acquittal of George Zimmerman offers at least that clarity. For the salient facts in this case were not in dispute. On 26 February 2012 Martin was on his way home, minding his own business armed only with a can of iced tea and a bag of Skittles. Zimmerman pursued him, armed with a 9mm handgun, believing him to be a criminal. Martin resisted. They fought. Zimmerman shot him dead.

Who screamed. Who was stronger. Who called whom what and when and why are all details to warm the heart of a cable news producer with 24 hours to fill. Strip them all away and the truth remains that Martin's heart would still be beating if Zimmerman had not chased him down and shot him.

Further reading
The comment is back after having been taken down for no acceptable reason. It struck me that the author apparently is a "person of colour" as they say in the USA. I suspect The Guardian had to put it back especially as in the US context nowadays it is seen as a leftwing paper, which it obviously is not (any more).
Posted by AdR at 12:12 p.m.