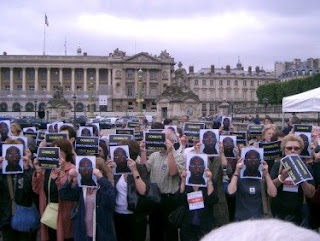 Amnesty International USA (AIUSA) decried today’s U.S. Supreme Court decision to deny a new hearing for Georgia death-row inmate Troy Anthony Davis. The Court had granted Davis a stay of execution just hours before he was scheduled to be put to death while it decided whether to hear the case. In denying Davis’ petition for a writ of certiorari, the Court has effectively ended a longstanding battle to have new evidence in Davis’ favor heard in a court of law.

“The Supreme Court’s decision is truly shocking, given that significant evidence of Davis’ innocence will never have a chance to be examined,” said Larry Cox, executive director for AIUSA. “Faulty eyewitness identification is the leading cause of wrongful convictions, and the hallmark of Davis’ case. This was an opportunity for the Court to clarify the constitutionality of putting the innocent to death – and in Davis’ case, his innocence could only be determined with a new hearing or trial."
"It is disgraceful that the highest court in the land could sink so low when doubts surrounding Davis' guilt are so high," Cox added.

The U.S. Supreme Court denied Davis’ petition for writ of certiorari that was submitted on constitutional grounds of due process and cruel and unusual punishment violations if an individual is put to death despite significant claims to innocence. Davis’ attorneys filed the petition after the Georgia Supreme Court’s narrow 4-3 ruling to deny Davis an evidentiary hearing last March; the ruling was based on technicalities rather than basic questions of guilt and innocence.
Davis was convicted in 1991 of killing Savannah police officer Mark Allen MacPhail. Authorities failed to produce a murder weapon or any physical evidence tying Davis to the crime. In addition, seven of the nine original state witnesses have since recanted or changed their initial testimonies in sworn affidavits. One of the remaining witnesses is alleged to be the actual perpetrator.

Since the launch of its February 2007 report, Where Is the Justice for Me? The Case of Troy Davis, Facing Execution in Georgia, Amnesty International has campaigned intensively for a new evidentiary hearing or trial and clemency for Davis, collecting well over 200,000 clemency petition signatures and letters from across the United States and around the world. To date, internationally known figures such as Pope Benedict XVI, Archbishop Desmond Tutu and former U.S. President Jimmy Carter have all joined the call for clemency, as well as lawmakers from within and outside of Georgia.
Amnesty International is a Nobel Peace Prize-winning grassroots activist organization with more than 2.2 million supporters, activists and volunteers who campaign for universal human rights from more than 150 countries. The organization investigates and exposes abuses, educates and mobilizes the public, and works to protect people wherever justice, freedom, truth and dignity are denied.