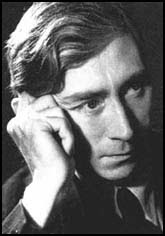 "We may be sure that out of the ruins of our capitalist civilization a new religion will emerge,just as Christianity emerged from the ruins of the Roman civilization. Socialism, as conceived by it pseudo-historical materialists, is not such a religion, and never will be. And though, from this point of view, it must be conceded that Fascism has shown more imagination, it is in itself such a phenomenon of decadence the first defensive awareness of the fate awaiting the existing social order — that its ideological superstructure is not of much permanent interest. For a religion is never a synthetic creation — you cannot select your legends and saints from the mythical past and combine them with some kind of political or racial policy to make a nice convenient creed. A prophet, like a poet, is born. But even granted your prophet, you are still far from the establishment of a religion. It needed five centuries to build the religion of Christianity on the message of Christ. That message had to he moulded, enlarged and to a considerable extent distorted until it expressed what Jung has called the collective unconscious — that complex of psychological factors which gives cohesion to a society. Religion, in its later stages, may well become the opium of the people; but whilst it is vital it is the only force which can hold a people together — which can supply them with a natural authority to appeal to when their personal interests clash.

I call religion a natural authority, but it has usually been conceived as a supernatural authority. It is natural in relation to the morphology of society; supernatural in relation to the morphology of the physical universe. But in either aspect it is in opposition to the artificial authority of the State. The State only acquires its supreme authority when religion begins to decline, and the great struggle between Church and State, when, as in modern Europe, it ends so decisively in favour of the State, is from the point of view of the organic life of a society, eventually fatal. It is because modern socialism has been unable to perceive this truth and has instead linked itself to the dead hand of the State, that everywhere socialism is meeting its defeat. The natural ally of socialism was the Church, though admittedly in the actual historical circumstances of the nineteenth century it was difficult to see this. The Church was so corrupted, so much a dependency of the ruling classes, that only a few rare spirits could see through appearances to the realities, and conceive socialism in the terms of a new religion, or more simply as a new reformation of Christianity."