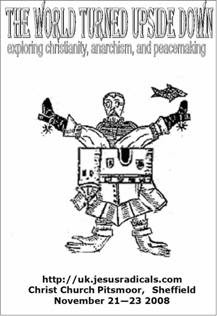 Christians from various traditions met together in Bradford in September
2007 to explore what a subversive gospel might look like. In this the second annual Christianity and anarchism conference delegates discussed the politics of food, peace studies, direct action and much more.
The weekend started with a shared meal, which in Bradford had to be a curry, followed by an open-mic session at Soul Space, the city's new fresh expression of Church. It was great to see friends from the conference at Leeds in June 2006 but also to meet new people and discover again how broad and diverse Christian activism can be.
There were present those who believe that activism should be aggressive and confrontational while others sought a more fun approach to challenging the principalities and powers. People shared stories of their experiences of corporate living, taking a stand against oppression, being arrested or standing alongside those who are oppressed in Palestine while trying to reconcile the settlers with their Muslim brothers.
Annie Heppenstall led some of the delegates in a discussion about the politics of food drawing from Old and New Testament texts, a version of which will feature in the free Christian anarchist magazine “A Pinch of Salt” in December. Keith Hebden led a small group in comparing and contrasting the ways Jesus and Gandhi challenged the strength of empire, a discussion which raised issues as to how and why we lobby government.
Perhaps the highlight of the event was a tour of Radical Bradford, led by Chris Howson. For those of us new to the city it was great to see how much subversion is going on just below the surface of the cityscape: an anarchist club run on principles of consensus with a fantastic anarchist library; community driven concerns about the gentrification of the city-centre; links to the formation of the Labour party back when it was a socialist affair and more. It was encouraging that so many Christians could walk into an anarchist club and be warmly welcomed.
I think we all left feeling we have had met some inspiring people and had new horizons opened up. Not surprisingly we are already looking forward to next years conference in Autumn 2008.