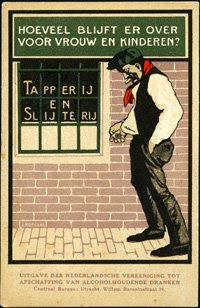 Closing part of introduction given at the Anarchist Studies Network Conference, Loughborough, on September 4th 2008.
Since any idea about a beschavingsoffensief is in no way relevant to historiography of the fin-de-siècle outside the Netherlands I can safely remove it from the article which is to be published in 2009. Back on the net, without popular demand...

Nearly twenty years ago I discovered the idea of christian anarchism and found out that there was a bachelor’s essay about latter day Dutch religious anarchism – which I only now am mentioning, as you notice – which essay recommended further research on the earlier Dutch christian anarchism. It had not been done yet and I made the subject mine, getting absorbed into it, as you can get as an historian. Several documents turned out to have been waiting for me for about ninety years, they had to be cut open especially – incidentally, this is still the case: the other day I found an archive filled with papers which had only visibly been touched by mice at the attic of whomever had kept it. So I still feel special and a bit lonely at the same time.

Even though I am virtually the only person studying Dutch christian anarchism, there were and are the know-it-alls who never kept from giving their opinion on it, stamping it as scientifically sound judgement. When I wrote my dissertation marxism was still colouring the official vision on the workers movement – amazingly, when you think of the year: 1989. Since obviously the end of leninism was looming months before the fall of the Berlin wall I took the liberty of disagreeing, arguing for anarchism and christian anarchism as THE authentic socialist current of the workers movement, particularly in the Netherlands, where social democracy was built up as a counter-revolutionary movement, subsidised by German industrialists. I should call it the grace of God that my dissertation was accepted and even praised, without my having to make any concessions. It might also have been the help of the spirit of marxist historian Ger Harmsen, who I consider to be my main teacher, who sympathised with what he – alas – called tolstoyanism. Getting this idea passed, I fear, would not be easy these days. Marxist ideas tinged with leninism have been replaced by an even more petty-bourgeois outlook on fin-de-siècle movements.

Vegetarianism, the idea of animal protection or liberation, teetotalism, enjoying nature and amateur study of nature, reading and self-study, the idea of chaste living – all themes running through the (christian) anarchist movement of those days – most of them still are, with the notable exceptions of teetotalism and chastity - are now being labelled as civilising offensive. The working class was waiting to be civilised – polished, is the connotation of the Dutch phrasing – by members of the bourgeoisie who knew what was best for them. Of course, social democracy is never included in this view. It seems I cannot read any Dutch book on the fin-de-siècle without this so-called offensive being applied as a label for the pacifist or deliberately defenceless movement of (christian) anarchists.

This idea is an utter betrayal of all working class and lower middle class activists of a century ago, who – if they were not the originators of certain movements, which they regularly were – welcomed the idea of a life transcending the tediousness and emptiness of working for sixty hours a week and spending the rare leisure time boozing. It reminds me of present day ideological apologetics of capitalism, which often claim that there is a so-called underclass which is beyond redemption, and of course this situation is what this underclass wants. No more civilising ideas, there are bars to be put behind for these asbo people. Well, of course this is not true now and it was not true a century ago – it never will be.