Face the faces of death! The Mediterranean tragedy is called Frontex!

door Joke Kaviaar
Lost are the faces, because lost are the lives. Their eyes, they see no more. They see no more fear on the faces of their companions, their families, their children. Not because they fear no more but because they are no more. Free at last. See no more and feel no more. No more hate, no more denial. No more fate to not be able to get away from - as if fate were ever a destiny rather than the result of the capitalist structures, the walls of the terrorist border agency Frontex in front of the shores that can never be reached unless dying.

No! Fate is not the cause of corpses washing ashore. It is the crime of the European states. Fate is not the reason for leaving all of all behind in search for a life non-existent. It is poverty and slavery that is the reason, caused by exploitation. It is not fate that shed blood. It is the laws of the Fortress of Europe. It is not fate that murdered. It is politics. It is greed. 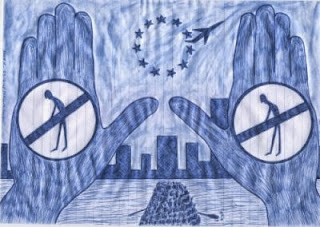 Lost are the faces, lost are the lives. Their tongues, they speak no more. They speak no more of despair, of the dream once sought. They never will speak of the truth hidden behind the cover up words of traitorous politicians - they put up a show on television and that is all we will ever know. Not the words from the tongues of those that drowned - not in an ocean of water but in an ocean of rejection, the water was it's mere physical projection, a tool of population control, a penal instrument serving it's purpose so well, so seemingly unintended, so sad. Oh so sad... Cry politicians, cry! Lie politicians, lie!

Look a man in the eye befóre he is dead. Now it is too late! Listen to them plea for the lives of their children, the mothers. Now it is in vain. Those are the faces you never will recognize, you cheating poor excuses for people's representatives, it's a outrage so many actually believe in you. Are they fools? No, they are being misled! Believing in honesty, humanity, believing in solemn vows. I lost this believe a long time ago! No matter how they deny, politicians, deny! Go ahead and try politicians, try! It will be over one day. And those that are dead, that have choked, drowned, burned, they get buried nameless. Who will call their mother? Who will tell their father? Who will take care of their children? Who will see them for what they are, for who they were? They are just another body count. Just another heap of victims of a tragedy, a drama. Fate again but not really. Fishermen too scared to save lives, scared of prosecution. Looking away, running away, the law is their institution.

And all the European leaders, they stumble over each other in a hurry to express their concern, stating that something shall be done about it, about all these people drowning. No more! They will be saved next time. But this rescue is not for real. This rescue is just another face of refusal to see or to listen, refusal to answer. Refusal to pay. It is just another method to make the so called problem silently go away.

All the borders, they belong to us. All the watch towers, they take care of us. All the refugees, they are a burden to us. All the war, it's got nothing to do with us. All the arms trade, we keep it far from us. All of the victims, they are but an excuse to perfect procedures, improve control. To prevent, apprehend, to steer back the suggested masses that are supposed to be a threat to our society. Yes, the poverty, the insecurity, insanity – you name it, we'll come up with some excuse to refuse, some story to deport. Lie politicians, lie! Say it, loud and again: We are not the bad guys. It's the human traffickers that did it and they shall be punished. Opportunity? It has nothing to do with us. Illegality, it is a crime we invented to be committed. And we are terribly sorry for that.

Victims, slaves? Go home, you losers! Beggars can't be choosers! All that we stole now belongs to us. Take your crappy boats and go back to where you came from! Lost lives from the lost continent of Africa. Too bad. Sails in still water. Hot sun, dry mouth. Damn, we got a problem, the tourist season has just begun. It is summer time! Do not spoil our fun, do not pollute our view, do not remind us of your existence. Be gone, be lost, be not too many starving at the same time, be not in the news today, please!

No time for that! Too busy and too concerned with our own poor industry, our own poor little crisis, our own poor little petty bankruptcy. Don't want to hear of those unfortunate refugees no more. Don't want any protestor to speak up no more, accuse us no more, no starving hollow eyed immigrants confront us no more. Be gone or be hiding! Or be locked up if you made it to our beach. And then you complain?! About the facilities? About cruelty? About the heat and the lack of clean water? Or about the rain and the lack of shelter? Now, what did you expect? A hotel?! Count your blessings! We reserved a bit of land for you to be your primitive prison camp, your nowhere to go, your final destination. Be grateful. You are alive. Would you rather be the face of death? Take your pick. We are humane. We are so humane, we should get an award for it. So little appreciation. We have to save our own nation...

Damn you politicians, for every word you speak in my name! All to blame!

Who is to take NO for an answer? The refugee, the deportee, or the opportunists politicians with their pleasantry? NO I say to border patrol! Take down the helicopters, the drones! NO I say to border control! Bring down the walls, the electric fences! NO I say to cops, to the military, and NO to marines! Let us take from you your uniforms so you stand naked. Butt naked! Waiting to receive what will be your end of the deal. You'll be damn lucky if only it is the rotten fruit that you handed out as food, an act of mercy. NO I say to the politicians, the European arrogance of power in Paris, London, Stockholm, Vienna, The Hague, Berlin, Rome, Madrid, Brussels and many more. May your houses, your castles, may your office and government buildings burn or collapse, fall apart, decay, or be squatted, occupied to last another day and serve those who actually need it. The survivors.

Do you hear them asking: Why politicians, why?

Face the faces of death! Face the graves of the ones disappeared. You may cry for the corpses in the Mediterranean, but face it politicians, you don't give a fuck. You just promise and promise and promise and once again you get away with it... Not in my name! We all know that freedom shall never be given, it needs to be taken. So do safety and peace, life and a future. They need to be taken and words will not be sufficient. Rest assured that it will all come crashing down on you, all that you call our own. It will be when pleas and protests and petitions are being replaced by resistance and sabotage. To end the carnage that is the Fortress of Europe!